2
by Max Hubbard in Reviews

The latest film written and directed by Harmony Korine, Spring Breakers, features Brit, Candy, Cotty and Faith, who are all best friends and college girls looking for adventure away from their mundane and unadventurous hometown lifestyles. In an audacious attempt to try and fund their spring break vacation in Florida they get the money they need by doing an armed robbery on a local restaurant. Once in Florida, the party is in full swing, but with the alcohol flowing and

END_OF_DOCUMENT_TOKEN_TO_BE_REPLACED

Spring Breakers features Brit, Candy, Cotty and Faith, who are all college girls looking for adventure away from their college dorms. In an audacious attempt to try and fund their spring break vacation in Florida, they land themselves in jail after attempting an armed robbery on a local fast-food restaurant. However, they soon find themselves being bailed out by a drug and arms dealer called Alien in exchange for some dirty work that leads to a spring break they will never forget.

With a cast that boasts Vanessa Hudgens, Selena Gomez, Ashley Benson and Rachel Kroine and a marketing campaign that has seen them all in little more than their bikinis, don’t be fooled into thinking that this is going to be another one of those summer teen movies. For this is a Harmony Korine movie. Known for his unconventional, non-linear, weird and often outrageous but refreshing filmmaking (Gummo 1997), ensures that there will be more than what first meets the eye in Spring Breakers. Certain to explore morals, pop culture, dreams, reality and religion and with an 18 certificate ensures that there is likely to be plenty of violence and exploitation making it certainly not one for the Disney crowd.

An impressive cast that seem to be looking to shake off that ‘High School Musical’ tag as well as James Franco cast as a class A corn-rowed drug dealer only makes the plot that much more mouth-watering. The cinematography appears to be drenched in a super cool neon pallet and with what is shaping up to be a blistering ultra slick soundtrack, I for one will be really looking forward to Spring Breakers. 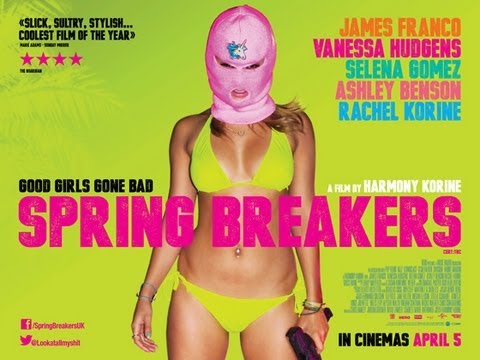 1
by Vicky Hinault in Posters & Images

We are loving this poster for Spring Breakers!

Starring James Franco, Selena Gomez and Vanessa Hudgens this film is looking set to be a lot cooler and edgy than it’s former Disney club stars would suggest.

Following 4 young girls who rob a liquor store to fund their spring break, they find themselves bailed out by a drug dealer who in return wants a favour.

Everything about this poster just screams cool, the pastel colours mixed with drugs sets the tone nicely for a film that will be sure to take innocence and mix it up with the underworld to create some chaotic onscreen entertainment.