In the Mouth of Madness is one of horror-maestro John Carpenter’s lesser known works: made during the mid 90’s after his golden age is arguably behind him, the film is a Lovecraft inspired exploration of the effect that horror has on those that consume it, whether through the written word or through cinematic images. 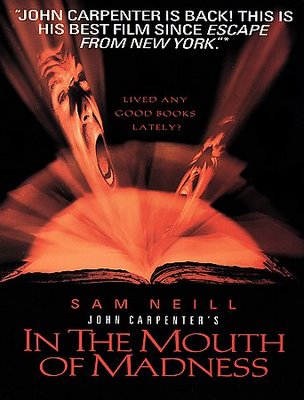 Sam Neill plays John Trent, an insurance investigator who is hired by a publishing house to track down their A-list horror author Sutton Cane who has apparently gone AWOL with his hotly anticipated new manuscript. Trent is initially a sceptic, believing the whole scenario to be a publicity stunt, but soon he is beginning to have strange and violent waking visions while reading Cane’s novels as research. With Cane’s publicist Linda Styles (Julie Carmen) in tow, Trent drives out into the American outback to where he thinks Cane is hiding, having impressively created a map out of torn up covers of Kane’s previous novels.

Things start to quickly go into “Outer Limits” territory as Trent and Styles realise that the town they have stumbled upon is in fact the imaginary town created for Cane’s novel, and the characters they meet are all deranged and violent characters from the story. One character they meet seems doomed to cycle to same stretch of road for eternity, aging in front of their eyes, while the innocent looking lady at the hotel they stay in is actually torturing her husband out of sight. As the film progresses the barrier between reality and fiction gets increasingly blurred with demonic forms starting to appear all around them. Needless to say, it goes downhill for Trent and Styles pretty quickly. 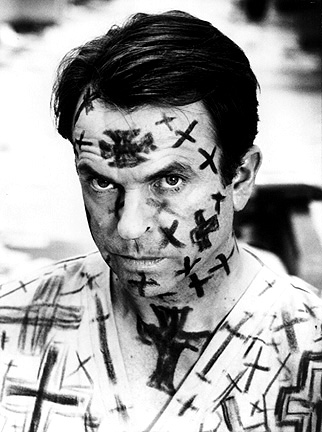 In spite of the film’s relative obscurity, it does have some interesting things to say about the communication of violence through different mediums. While knee-jerk reaction news media are quick to blame real-life violent activities on the films, music or novels that a violent individual may read, it is a complicated and sometimes tenuous argument as to whether violence exists within the medium itself or the individual, and whether the outbreak of violence can be seen to be directly caused by the consumption of particular media.

This film takes that basic question and runs with it in a very nihilistic way. At the end of the film, the whole of humanity has turned into violent maniacs, effectively wiping out society. In a apparent nod to “Dawn of the Dead”, a radio newscaster is heard reading what has happened and advice to stay safe, before the sounds of people breaking into the room cause the signal to be cut off. While the explanation for this is very much in the realm of fantasy in that Cane’s writing has tapped into a dark underworld of demons and monsters that are brought into the real world, causing people to go insane with rage and violent desire when they read the book, the film does offer one final point which reflects back onto us as an audience.

In the final sequence, Trent staggers out of the insane asylum where he is being held into the nearby town, which is deserted. He stumbles into a cinema, apparently playing the adaptation of Cane’s recent novel which has caused all this destruction. When we get to see the film being projected, it turns out to be images from Trent’s own experiences during the film we ourselves have just watched. As Trent descends from maniacal laughter to sobs of tears, we realise that we are in some way perpetuating this cult of violence that the film has been critiquing. Even though we are (hopefully) a long way off from the self destructive bloodlust that lies beneath the surface of our humanity, the film seems to say that we are doing it no favours by continually creating and encouraging forms of violence through our passive consumption of it.

This entry was posted by Will Smith on April 22, 2013 at 10:29 pm, and is filed under Reviews. Follow any responses to this post through RSS 2.0.You can leave a response or trackback from your own site.