Fritz Lang’s first sound film is a complex piece of cinema. Based on an actual contemporary occurrence of a child murderer in Germany who repeatedly escaped capture and inspired many of the events that take place in the film, it is both a tense examination of the procedural process involving the  tracking of the criminal, while also exploring the effects the situation has on the mental state of both the individuals involved and the city itself.

Lang was no stranger to stories involving criminals: his earlier silent films “The Spiders”, “Dr Mabuse: The Gambler” and “Spiones” all deal with criminal gangs and underworld crime, usually headed by an elusive mastermind who defies almost all attempts of capture. “M” however, focuses on a single individual; Hans Beckert (Peter Lorre), a compulsive and troubled child murderer. Beckert remains mysteriously absent for almost half the film, excluding a silent cut away where he is seen pulling faces in a mirror. This heightens the mystery surrounding the character and allows the film to focus on the increasing public hysteria and decision of the criminal underworld to take matters into their own hands when they realise the police are unable to capture him themselves.

In some ways “M” can be seen as continuing some earlier stylistic elements characterised in earlier German Expressionist films, yet integrating them into a more modern and realist style that would later evolve into Film Noir (which Lang would later spearhead after his move to Hollywood). The film contains its fair share of expressionist shadows, darkened streets and a brooding claustrophobic atmosphere, yet uses the very strands of the narrative almost like a spider’s web, bringing all the disparate elements of the story into the final climax where Beckert is cornered like a fly awaiting to be pounced on and consumed by a blood thirsty spider. 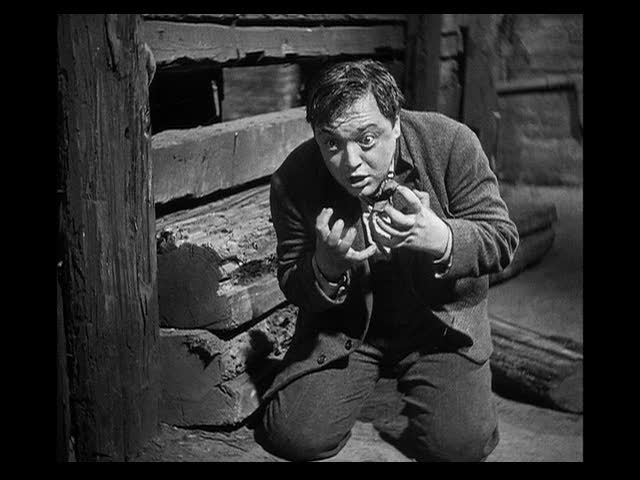 Lang’s first use of sound allows Lang to expand his technical vocabulary by contrasting the sound from one scene with the images of another (a common techniques these days but innovative for the time): a mother calling out for her child is contrasted with the empty space at the dinner table, the empty stairwell of the apartment and the child’s balloon floating ominously into telephone wires. It also allows Beckert to have a signature whistle which indicates his presence even when he is not onscreen, again adding to the unnerving atmosphere and mystery surrounding the character. The ability to increase the amount of dialogue used in sound film compared to silent films and their use of intertitles lets Lang cross-cut more frequently between parallel scenes, contrasting the police’s investigation with that of the criminal’s own, objectively comparing how different organisations with opposing moral standards are both able to work towards the same goal. It is this objectivity which makes the film so successful: you do not get a sense Lang is trying to condemn the murderer and glorify his capture, but to show how mentally troubled this individual really is and how both official and unofficial means of prosecution are both ineffective in resolving the wounds that have been left on the city because of his actions.  “M” still stands up as a powerful piece of cinema: partly because of its very original cinematic construction, partly because of the Lorre’s spellbinding performance in the end scene where he bears his soul to his underworld captors.

The film has been released numerous times on DVD but most recently by Masters of Cinema in an edition which features both the original German version and the recently discovered British release. The British version is worth watching to compare how the narrative was slightly altered for its release in the UK, and has Lorre giving his performance in English, rather than having it overdubbed like the other performances.

This entry was posted by Will Smith on April 14, 2013 at 4:03 pm, and is filed under Features. Follow any responses to this post through RSS 2.0.You can leave a response or trackback from your own site.